How We Make Salt 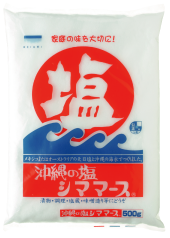 Under the Salt Monopoly Law, after countless negotiations with the Japan Tobacco and Salt Public Corporation to revive Ma-su “Salt” before the reversion of Okinawa to Japan, and within the framework of the law, Okinawa Salt “SHIMAMA-SU” was born by a method of manufacture whereby imported bay salt was bought from the Japan Tobacco and Salt Public Corporation and then revived or processed.
Today, in accordance with the original manufacturing methods, imported bay salt (from either Mexico or Australia) is completely dissolved in Okinawan seawater and recrystallized using an open pan.
The salt blends well with all types of foods and can be used for a wide variety of dishes including pickled vegetables and fish.

The production of SHIMAMA-SU begins with dissolving imported bay salt (from Mexico or Australia) with seawater from Okinawa.

The highly concentrated seawater is slowly boiled in the open pans inside the crystallization chamber.

Any extra moisture is extracted from the crystals in the dry chamber, and SHIMAMA-SU is finished.

The salt is sifted, measured, and packed by hand, one by one. All of our products receive this individualized inspection and care.

The products are passed through weights and metal detectors to check for foreign objects, and also must pass a human check. After these strict quality control inspections, the SHIMAMA-SU is shipped to vendors. 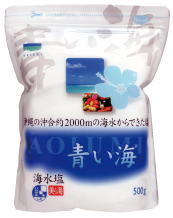 With the abolishment of the Salt Monopoly Law in 1997, salt could now be made from seawater. With this was born the Okinawa Sea Salt series that used 100% Okinawan seawater, a long-sought desire since the company was founded.
A pipe was placed in the Okinawan seas, approximately 2,000m out from the coast of Itoman. This salt is made by slowly boiling down the seawater that is pumped up from these waters. The salt not only has a salty taste to it but there is also a faint sweetness as well and can be used for all types of cuisines including Japanese, western, and Chinese.

Salt crystallization. These are slowly boiled in an open pan.

Extra moisture is completely expelled in the dry chamber to produce a mild flavor in the salt.

The salt is measured and packed meticulously by hand, one by one.

The product is checked for foreign objects using weight checkers and metal detectors. After a final check by the inspector, the Okinawa’s Sea Salt AOIUMI is packed and shipped off.